Summer is really the only time I have a chance to sit back and read. During the rest of the year, I am usually too tired at night and just veg out in front of the tv, horrible I know. However, during the summer, I have a chance to sit by the pool while my kids play, and indulge in some good reading.  All year long I am putting books into my shopping cart on Amazon, only to order them all once the warm weather has arrived. This year, I thought it would be fun to share my Summer Reading List 2017 with you. ELEANOR OLIPHANT IS COMPLETELY FINE// Smart, warm, uplifting, Eleanor Oliphant is Completely Fine is the story of an out-of-the-ordinary heroine whose deadpan weirdness and unconscious wit make for an irresistible journey.  This book is being made into a movie starring Reese Witherspoon.

THE SECRET LANGUAGE OF FLOWERS// A mesmerizing, moving, and elegantly written debut novel, The Language of Flowers beautifully weaves past and present, creating a vivid portrait of an unforgettable woman whose gift for flowers helps her change the lives of others even as she struggles to overcome her own troubled past.

CRAZY RICH ASIANS// Kwan’s debut is a scintillating fictional look into the opulent lives of fabulously wealthy Chinese expats living in Singapore. Economics professor Rachel Chu has no idea what she’s in for when her handsome boyfriend, Nicholas Young, invites her to join him at his best friend’s wedding in Singapore.

A HUNDRED SUMMERS//  A blend of history, romance and social commentary. Also, it has a Rhode Island connection.
Lily Dane has returned to Seaview, Rhode Island, where her family has summered for generations. It’s an escape not only from New York’s social scene but from a heartbreak that still haunts her.

LUCKIEST GIRL ALIVE// If you liked Girl on a Train, this is a must read for you. This murder mystery is described as a page turner you can’t put down.

GOOD AS GONE// A gripping thriller about a kidnapping.  Can you tell I love a good mystery novel?

WE WERE LIARS// A beautiful and distinguished family. A private island. A brilliant, damaged girl; a passionate, political boy. A group of four friends—the Liars—whose friendship turns destructive. A revolution. An accident. A secret. Lies upon lies.True love. The truth.

YOU// A terrifying exploration of how vulnerable we all are to stalking and manipulation. You is a compulsively readable page-turner that’s being compared to Gone Girl, American Psycho, and Stephen King’s Misery.

THE FEVER// A chilling story about guilt, family secrets and the lethal power of desire, THE FEVER affirms Megan Abbott’s reputation as “one of the most exciting and original voices of her generation.”

INTO THE WATER//
A single mother turns up dead at the bottom of the river that runs through town. Earlier in the summer, a vulnerable teenage girl met the same fate. They are not the first women lost to these dark waters, but their deaths disturb the river and its history, dredging up secrets long submerged.

TRULY MADLY GUILTY// I have read most of Liane Moriarty’s books and loved them all.  In Truly Madly Guilty, Liane Moriarty takes on the foundations of our lives: marriage, sex, parenthood, and friendship. She shows how guilt can expose the fault lines in the most seemingly strong relationships, how what we don’t say can be more powerful than what we do, and how sometimes it is the most innocent of moments that can do the greatest harm.

What books are you reading this summer? I need to add to my list….:-) Hi, I’m Kirsten. I am a makeup artist with 20+ years of industry experience and creator of this blog, The Beauty Blotter, where I share quick & easy makeup tips  and affordable fashion finds for women 40+.  I am so happy you are here. Grab a glass of wine and stay a while… 🎄CHRISTMAS BEDDING🎄 My husband and I watche

I loved this sweater from the second I saw it! It

✨PRETTY IN PETAL✨ Today I am sharing how to u

🏈SUNDAY FUNDAY🏈 🏈Now that is getting chi

COZY LOUNGE SET Do not sleep on this new cozy lin

✨KITCHEN GLOW UP✨ 🐶I am so excited to shar 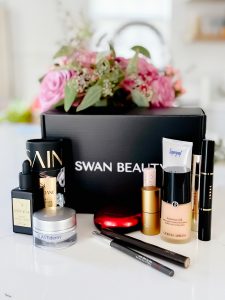 🎄CHRISTMAS BEDDING🎄 My husband and I watche

I loved this sweater from the second I saw it! It

✨PRETTY IN PETAL✨ Today I am sharing how to u

🏈SUNDAY FUNDAY🏈 🏈Now that is getting chi

COZY LOUNGE SET Do not sleep on this new cozy lin

✨KITCHEN GLOW UP✨ 🐶I am so excited to shar

✨GRWM-PARTY EDITION✨ I can get you party read

✨GET PARTY READY IN UNDER 5 MINUTES✨ ✨Getti

MAKEUP ESSENTIALS FOR WOMEN OVER 40 If you are ov